June 22, 1955. Late at night, the Holland American Liner, the RYNDAM docked in Québec city, not very far from the CHATEAU FRONTENAC.

On September 20, 1952,Raymonde Raimbault, of French origin, native of Berry, daughter of Constant Raimbault, château gardener for the Count Jean de Rancourt de Mimérand had married Joseph Zimmermann, French watchmaker, born in Lorraine. At the time, Joseph Zimmermann had been working for Cartier in London. 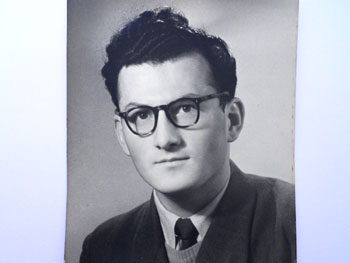 On September 17, 1957,after a short stint at Oméga in Québec city, working in difficult conditions, Joseph set up his own business. In the living room window of his semi-basement flat, situated at 387, 25e rue, in Limoilou, he placed a white sign on which appeared in black lettering the following: FRENCH WATCHMAKER, meticulous work. March 27, 1956, Raymonde gave birth to Monique, and Eric would follow on January 24, 1962. Nevertheless, on July 2, 1963, Raymonde was to find the stamina to open the 1st watchmaker and jewelry shop in Les Galeries St-Jean in Old Québec. From a first trip to Paris, she would return with medals, chains, wedding bands, broaches in 18ct gold or in silver. All these items having been put forward to her by the finest French makers. Tremendous respect for their customers, respect for quality watches, clocks and jewelry, pride in work well done, were constantly and foremost in their minds. In 1968 Joseph Zimmermann received the title of Meilleur Ouvrier de France (Best Worker of France). He received this honor for the crafting by hand of a considerable number of parts for a pocket-watch. The Association of the Best Workers of France is comprised of hundreds of different trades.