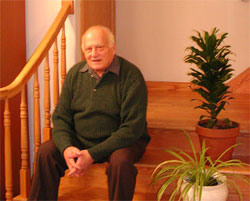 At 18 years old, the very idea of learning the craft of jewelry making, of living in Paris, the city of light, was most seductive. While my parents gave me the sense of work well done and honor for the given word, it is in Paris  that I would  cultivate my mind and my tastes.

For the next 7 years, from 1971 to 1978, I visited museums both of greater and lesser importance, exhibitions, churches, cathedrals, libraries, antique dealers, auctioneers, public sites and monuments.

In Paris, I would understand that in all trades, thought and imagination and the design itself must precede the work per se. It also became obvious to me that by separating the terms arts, trades and crafts into distinct linguistic appellations, a pleonasm of sorts had been created.

Back in Québec city in 1978, I decided to handcraft all of my jewelry, not once resorting to casting techniques of any kind. The general catalogue for the Zimmermann jewelry shop now holds hundreds of models for reference, in addition to thousands of others of all the jewelry made at the workshop situated at 46 Côte de la Fabrique in Québec city. In 1990, the Zimmermann jewelry shop finally set down its roots at 46 Côte de la Fabrique, opposite the Québec city-hall. My son Pierre, born in Québec on April 21, 1980, joined the family business in 1999. He also make jewelry that is solely handcrafted. I wish him, pride in work well done, pleasure in what is beautiful and a sense for creation. Pierre and Michel Zimmermann at the Zimmermann Jewelry store are now pursuing that tradition of quality in the making and selling of precious stone jewelry and precious metal jewelry, always entirely handcrafted. From left to right : Michel and Pierre. With the launching of this Internet site, the Bijouterie Zimmermann now has a window onto the whole world. A new business card in color, new windows with panes of frosted class, a new sign on the façade of Côte de la Fabrique, the home page for our Internet site, all exhibit the designs of lotus flowers and the fleurs de lys. These two flowers respectively symbolize my apprenticeship in Paris and my love for Québec